A downloadable tube for Windows, macOS, and Linux

veadotube mini is a lightweight, easy-to-use pngtuber app. if all you need is a simple program that lets you switch between two images as you talk, then this program is for you! 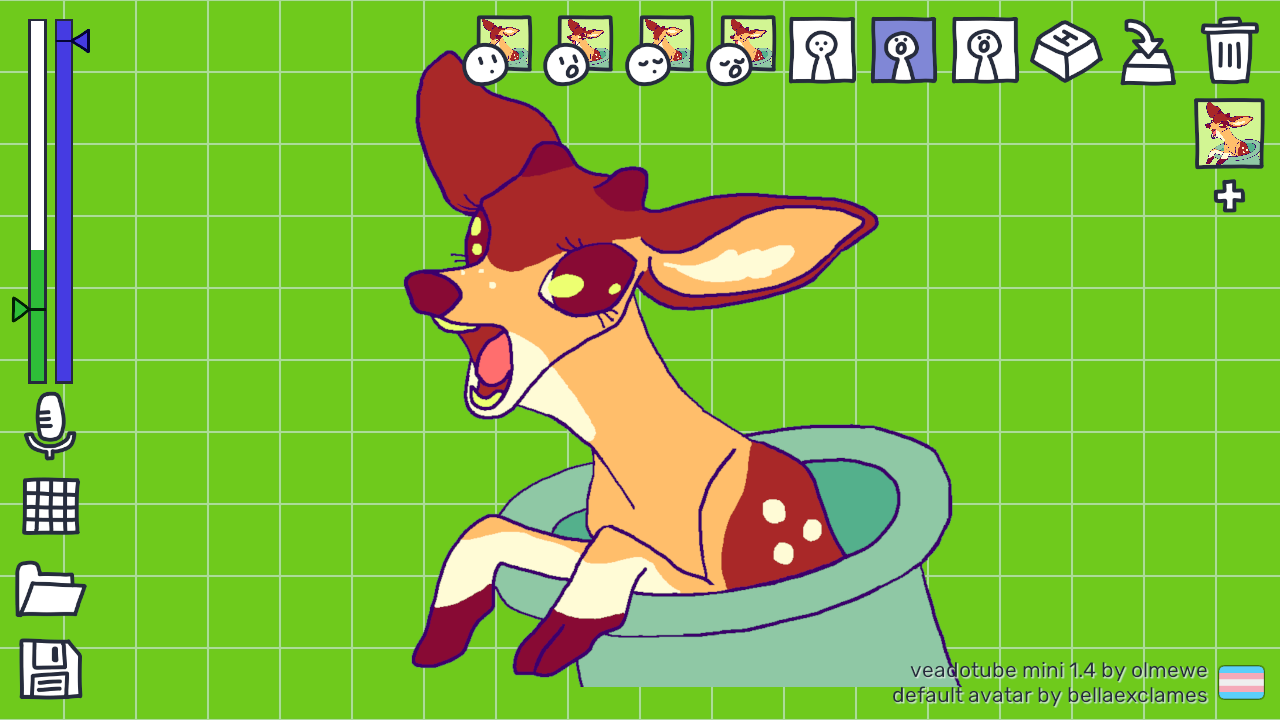 this is part of veadotube, a soon-to-be app suite meant to make it easier to create 2D virtual avatars :] visit the official website for more info!

the mascot above is Tube the deer (they/them), designed by bella!.

It keeps crashing everytime I try and add a hot key. is there a way to fix it? I love this app

I put it into fullscreen mode and there is no escape. I've tried everything from googling the ctrl-enter and literally spamming ecsc and I'm stuck forever now. Even uninstalling and reinstalling doesn't fix it. Any ideas how to fix it...? Thank you!

Can you try making one for mobile please? You can make it a website or something

How do I/Can I use this for Twitch?

so once you get the app set up, set it as a source in OBS, then edit that source to add a chroma key, and chroma key out whatever the background color is.

Hello I have been trying to download this and I keep getting errors, and when I do download it I try to open it but it doesn't want to. (I use the Windows 64-bit verison as that is what my pc uses)

hello. iv been using this app for a little while and finally got around to useing the state feature for emotional states of my model. but when i set up quick key, they only work if i have the veadotube window on the top and selected over everything els. this is a issue when single screen streaming. is there any way i can get around this? ill also be useing Touch portal.

Finally got better internet to stream, and downloaded this, it seems to have a virus now upon download..What is going on? ):

hey im using the linux build (pop os 22_04) and whenever i select a specific image it just instantly crashes with no logs in my terminal, this used to never happen when i used it earlier this year, does anyone know on how to fix this?

Absolutely love the program and recommended it to many people who've also loved it!

Just wondering if it's possible to get it to work with Stream Deck somehow? Currently I have to tab to the program to change to the different avatars that I've got. Being able to do that with the stream deck or just in OBS would be fantastic (or if you can, can someone please help me figure out what Im doing wrong?)

this app have a spyware or not?

We can't even make a pngtuber in ohio 💀💀💀

Would it be possible to add an option that lets the user select what channel the avatar reacts to? Like, say I've got two microphones plugged into a mixer and I've got one hard panned to the left channel and the other to the right, and in Veadotube I have the mixer set as my microphone device. I'd like to be able to set it so that the avatar only reacts to one of those channels.

not the creator, but under 'window match priority' if you select 'match title, otherwise find window of same executable' it should grab veadotube every time. if you're having png guests then you'll have to do it every time but if its just you then this should solve the issue

I want to support this project some more, but I'm so broke

tbh it my mac it says its damaged? and i cant open it

I found a solution on youtube and it works.

Hey! Hopefully i can get some help here. Ive got my character and everything in, and ive got OBS opened but im seeing a green outline around my character. Anyway i can turn this off?

You need to adjust how well the green screen filter is working on your avatar. Might need to up it a little more.
Other than that and maybe cleaning your image, there isn't much more we can do when this happens.

Hey, I had this problem to but managed to fix it this way: head over to https://github.com/Off-World-Live/obs-spout2-plugin/releases and download the spout plugin suitable for you, run the file, accept the prompts and save it into the OBS directory folder. Once its installed you can add a new element in OBS called spout2, do that and in the options button in veadotube mini turn spout streaming on, they should connect form there and hopefully will fix the outline, did for me :3

This worked for me! Thank you so much!

As a note, there's a filter in obs called "Spout Filter" and applying it to a "Game Capture" with veadotube mini selected does NOT work.

You need to Add Source and select Spout2 Capture. Select veadotube mini under "Spout Senders" and you should be good to go.

I love this, and I especially love the license agreement!! Very nice!

is there a feature request place?

I just got this suggested to me by a friend (pretty cool stuff) but after my stream today I think a really neat feature would be a second volume threshold to trigger an additional state, so if you start yelling or just talking loudly, your avatar can appear angy. (or excited, or just vibrate more, etc)

Will it come to android?

heyo, on linux (i'm using arch with pipewire) the program does not detect the microphone if i run it as root.

So there's no way of using the keybinds to switch the images and also having the character move with the audio input :(

One workaround ideia i had that might be able to fix this is to make the app have keybinds that only work locally, on it's own window.

That should allow the user to use some external script with a program like xdotool to send keypresses specifically to veadotube.

With that working the user would be able to go on the configs of their desktop environment, setup a system wide hotkey to run the xdotool shell script and then it would work as expected.

Also i rlly like ur stuff, keep the awesome work up!

im boutta make a markus one outta this

On windows 10, I download the file and it just dissapears from my downloads (and downloaded all the software it wanted)

on mac it says it's damaged, macOS Monterey 12.6

I downloaded it but I can't get on it

Hi, thank you so much for creating this, I love it !

how do I make the veadotuber?

you just draw em up and insert them into the file

Veadotube keeps closing every time I try to set a hotkey. Is there something I'm doing wrong?

How to i change the avatar of the pngtuber

click the sprite boxes on the top, hit "change" then select whatever file of the pic you wanna use

anybody having problems with hotkeys?, I have My Obs working with a midi controller and I have extra space for my png tuber movements and emotions, but it keeps crashing while I'm applying a button of my midi controller as a hotkey.

I run all of my programs on administrator and still didn't help against it. but I think I figure it out, that it could be a plugin in obs with midi that could have been cancelling and freezing both obs and veadotube.

Can u play this on Android

Number 2: The way it is coded and made wouldn't be possible on Android.

i wish this was free :I

it is, you just haver to click "no thanks, just take me to the downloads"

I understood how to fix the hotkey issue, just run it as administrator. Then OBS won't clash with it.

OBS ver 28 seems to have broken Veadotube. Everything was working fine pre-OBS update, now, nothing. Ideas?

start veadotube as an administrator

my microphone delay sensitivity is all the way up help

to turn it down, click and drag the blue triangle

I'm currently having an issue where now in game my hotkeys (number pad on the left of my keyboard) will not change reactions on my pngtuber unless I click out of the application to a different screen. It worked for me plenty of times until around yesterday. Please help : (

OH I fixed it! Just make sure if you have to use window capture for anything to make sure capture method in settings for window capture is set to "automatic" . : ) this app is great thank you so much olmewe! <3

AGH! you also need to make sure you not only run obs/streamlabs in admin mode, but also veadotube mini! and that why hotkeys wont be taken by the game you are playing : )